EXPECTED GOALS
22.08.2017
WEIGHTING SHOTS TO UNDERSTAND THE COURSE OF A MATCH
CHRISTIAN OTT
AUTHOR
Introduction
The amount of shots per team is often used alongside possession and pass success to determine, which team played better in a match in addition to the pure result. However, a team can shoot the ball 5 times from 30 yards out or 5 times from 6 yards away from the goal, so the shot statistic unfortunately gives us no indication, of how dangerous the shots of a team were and how likely they were to turn into a goal. Nevertheless, it would be definitely an improvement for shots to be weighted so spectators could see, which team had better chances in a game and therefore was more likely to win.


Expected Goals
Certainly, this approach is not new and came up as soon as additional data to shots started to get tracked. It is usually called “Expected Goals (XG)” as it shows you, how many goals you could have expected on average according to the shots taken in a match. There are quite a few different models out there, where football analysts weighted shots according to different criteria. Often-used criteria for weighting shots are the shot location, the angle to the goal, the situation of play and whether the shot was a header or not. The more criteria are used to weight the shot, the more precise a probability becomes to determine, to which degree a shot turns into a goal on average.


XG on Christianott.co
I am running my own expected goals model, which values shots by looking at 4 factors: The shot location, whether it was a clear-cut chance or not, the situation of play and whether it was a header or not. Blocked shots are left out of the equation, except if the blocked shot was a clear-cut chance. The analysis is based on a total of 500,000 shots and should therefore be precise. It is less detailed than the models by Opta or 11tegen11 however, because I simply do not have as much information on shots. The biggest weakness of my model is, that I do not have exact coordinates on the location of a shot, and can only distinguish them by whether they were taken from the 6-yard box, the 18-yard box or from outside the box. Assists on shots are not contained in the analysis as well. Nevertheless, the model certainly has its value, since it is a better predictor for a player’s offensive capability than just the amount of his shots and goals.


An easy XG model
Based on this data, I developed an easy expected goals model, that differentiates just five shot types and shows you their probabilities for turning into a goal. Important note: These five shot types exclude each other. For example, penalties are not included in the clear-cut chance calculation or a shot from the 6-yard box is not included in the calculation of shots from the 18-yard box. Find the probabilities below:

Wrap-up
Looking at the probabilities of these five different shot types, you can get a feeling on whether or not a shot was likely to be converted into a goal. With these five occasions, it should be possible to calculate your own expected goals value for a match by only knowing some additional information of the shots in a match. For example, the number of shots inside and outside the box can be found for many matches and whether there has been a penalty can be found anyways. The only advanced occasion is the clear-cut chance, which cannot be found in every match statistic, but with football analysis advancing further, I expect it to be used more often. 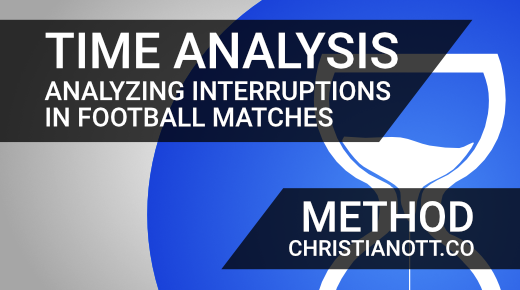